A talk by Jess Jones is like catching up with a friend, so we welcomed her and a lovely display back for an evening entitled’ ‘We need to talk bout Buxus’

Jess started with her favourite evergreen plants, stressing these were not replacements for box, rather she uses them with box to add structure, colour, shape and height to a garden.

First was yew, Taxus baccata, which she described as ‘not liking wet roots but otherwise bombproof and not as slow growing as people think’. She clips twice-yearly keeping them dense and uses fastigiate or Irish yew for its columnar habit.

Jess likes Pittosporum tenuifolium for its variety of colour, particularly ‘Golf Ball’ saying as well as taking a good clipping it’s great in Christmas wreaths adding a touch of roundness.

Osmanthus x burkwoodii with its small white, scented flowers was next which Jess uses neatly clipped against walls and in the open garden.

Jess then went onto box, Buxus sempervirens, explaining that box blight fungal infection arrived in London in in 1997/8 and is still spreading, box moth with its destructive caterpillar appeared in 2007. Jess took us through the moths lifecycle adding, although there is no natural predators, jackdaws have been seen eating caterpillars, a small ray of hope.

Not a fan of ripping out box Jess encouraged us to be vigilant,  look inside our plants, break off any brown bits, burn or bag for the tip,  not to clip when raining as this leaves cut ends open to spores that need moisture to travel, also clip and open up centres allowing air flow.  Mulching to lessen splash back and feeding to strengthen plants were also advised.

Such was the friendly mood of the meeting that a member told us of a fungal foot infection, saying that cider vinegar had been recommended as treatment and wondered if it would work on box? If you try it do get in touch, we would all love to know the outcome! 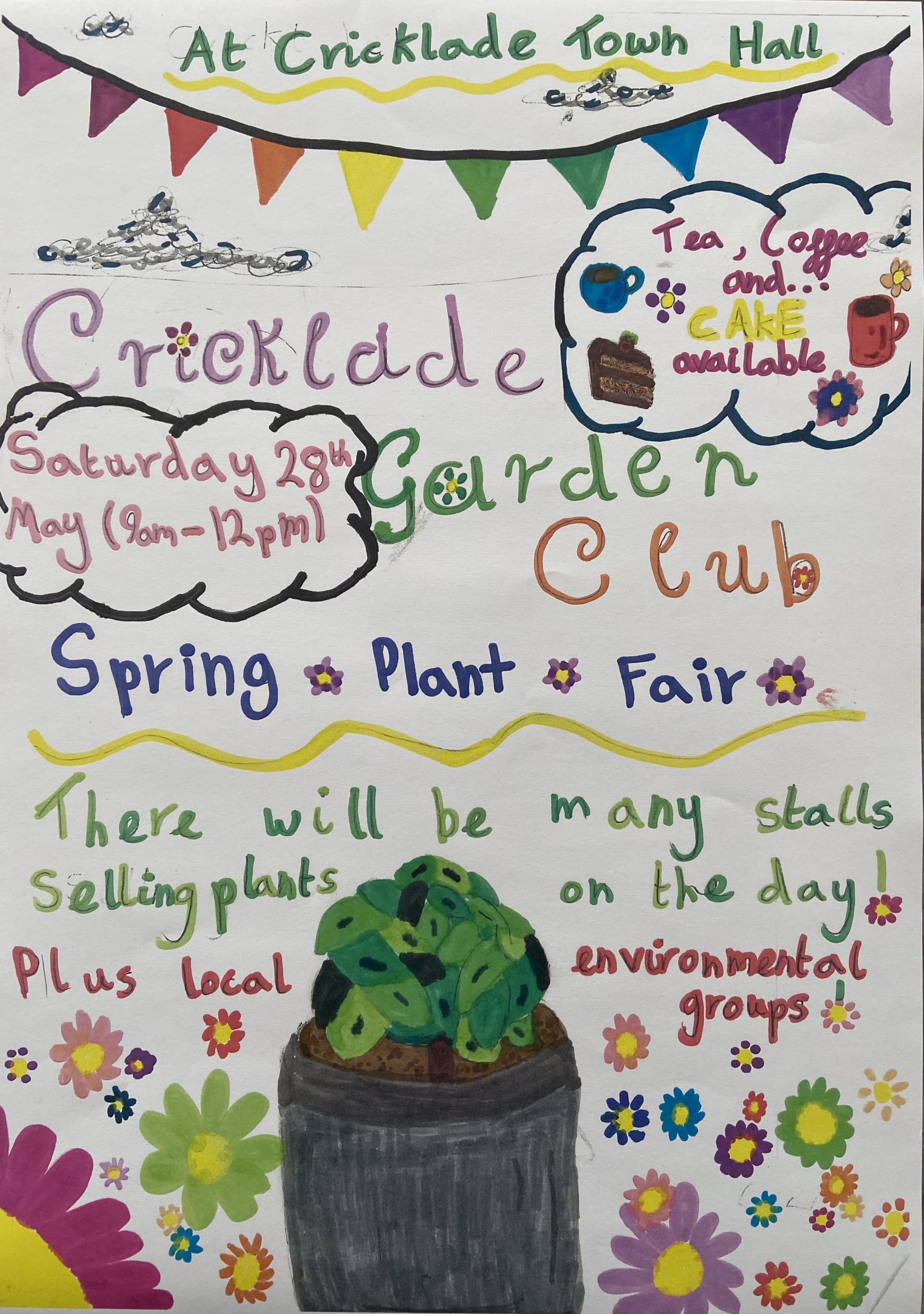 Paul Green from Green Leaves Nursery gave us a talk on ‘Sensory Sensations’ and what an informative and amusing talk it was!

Encouraging us to contribute, Paul took us through a range of plants he brought with him, explaining their size, position and condition preferences. It was liberally sprinkled with anecdotal information, thoughts and opinions, tips and humorous insights such as whilst on a committee for plant naming, he learnt that girls’ names, alcohol and those a little rude, sell well!

Explaining that breeding improves what you may think of as a boring plant, Paul showed us new introductions such as Polemonium ‘Heaven Scent’ with dark foliage and purple flowers adding that if you cut it down after flowering you will get a second flush and maybe a third. Also, the gorgeous Phormium ‘Platt’s Black’ that he commented would look equally good in the border alongside oranges and yellows or in a large pot – but don’t over firm the compost or you will ruin the soil structure he advised.

The hour sped by as we learnt and giggled our way to the burgeoning sales table.

Paul you are welcome back any time.

Freelance journalist, Mandy Bradshaw, kicked off Cricklade Garden Club’s 2022 programme with some interesting insight behind the scenes on Press Day at the world-famous Chelsea Flower Show.

Mandy, a writer for newspapers and magazines is a regular at Chelsea, where, laden with camera, notebook and guide book and dressed in full length waterproof and stout boots, she says it’s crucial  to decide beforehand what to cover. With over 60 photocalls approximately 10 minutes apart organised throughout the day and across the showground it’s impossible to cover them all.

With background pieces prepared in advance Mandy looks for something unusual to provide the newsworthy angle. With 20 years’ experience as a Cotswold- based garden journalist with a regular monthly feature for Cotswold Life, her focus is with anything linked to that area.

Sometimes it’s the garden that’s important, such as the Yeo Valley show garden designed by Tom Massey which was the first organic and peat-free garden at Chelsea; sometimes the designer, such as Chris Beardshaw, Paul Hervey-
Brooks or herb queen Jekka McVicar. Sometimes a celebrity is doing something interesting such as when Lawrence Llewelyn-Bowen launched a rose appropriately named ‘Frilly Cuffs”, on other occasions a sponsor, constructor or sculptor may be in the spotlight. Mandy says it’s important to think laterally to get the local link such as writing about a new rose called ‘Highgrove’.

A September Chelsea with its different range of plants meant Mandy was able to highlight growers such as specialist Penstemon nursery GreenJJam.

The overriding benefit of attending Chelsea on Press Day is that it’s largely empty, making it possible to walk onto gardens, look at the details and chat with people; Mandy says the Chelsea pensioners along with models and celebrities, love to pose for a photograph!

Mandy has her own blog called ‘thechattygardener’ 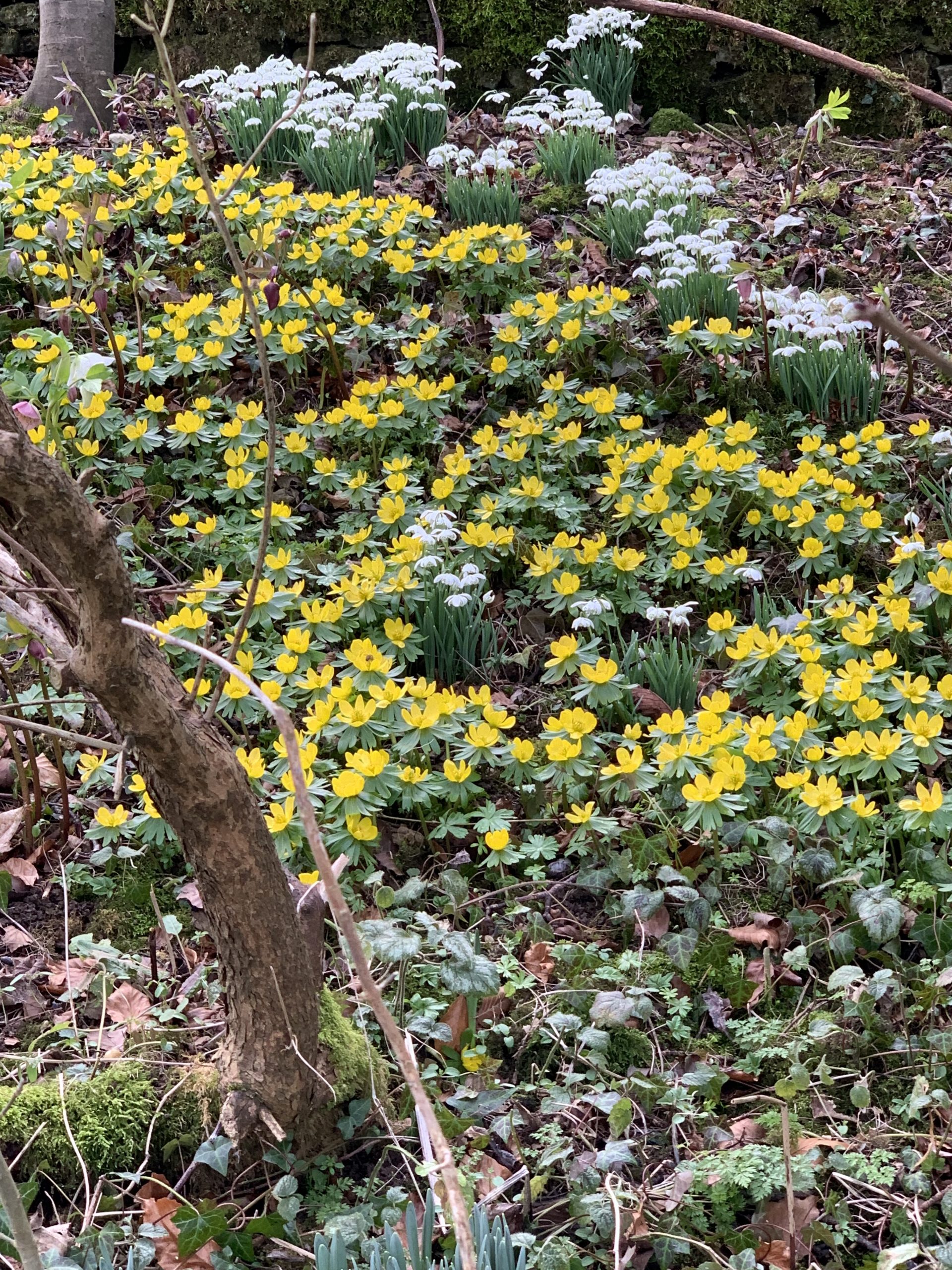 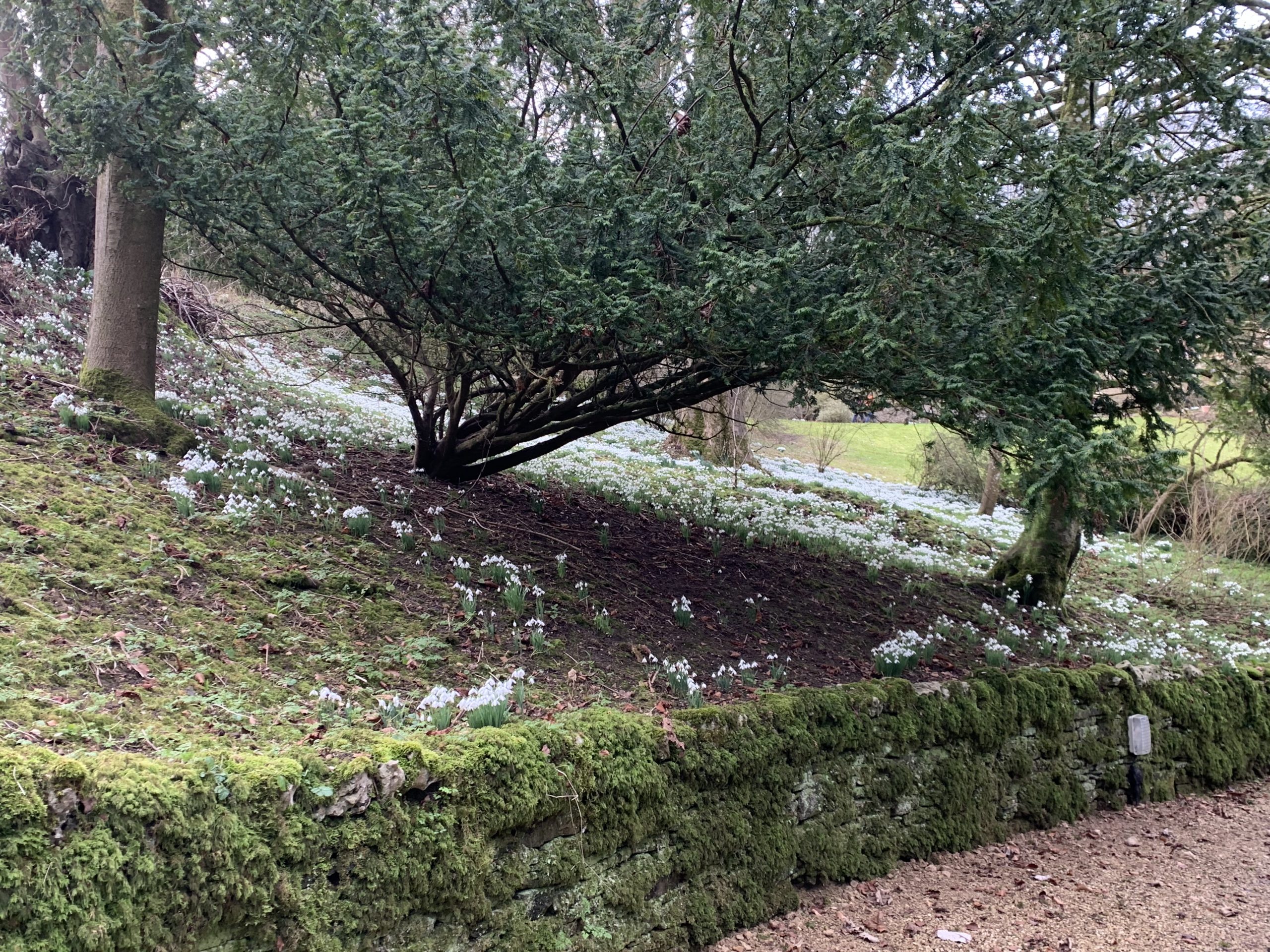 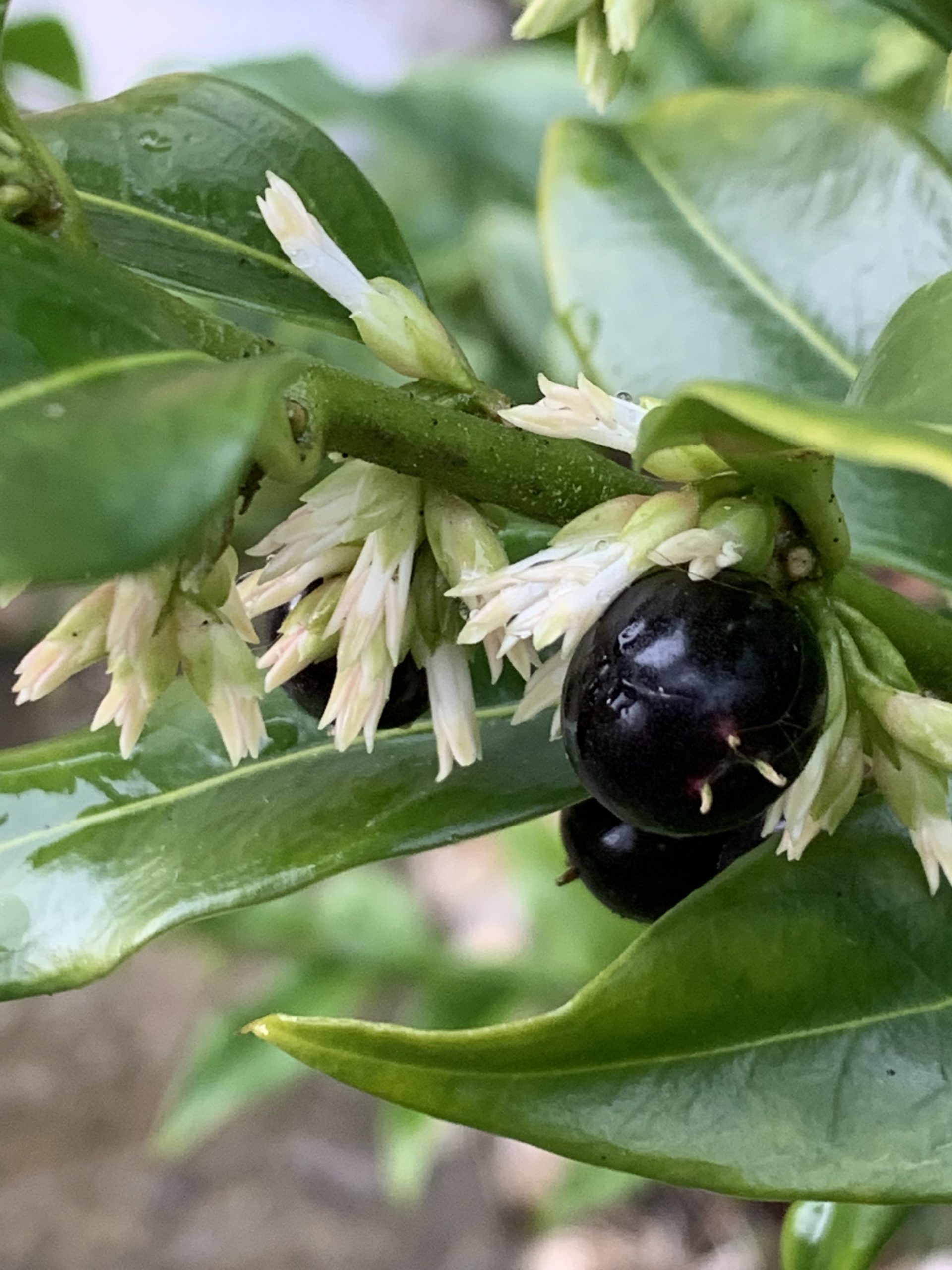 We finished the year on a light note with Adrian James whose talk entitled ‘Folklore and More! was packed with information, history, mystery and humour.

Adrian took us through the year by plants starting with the changing symbolism of snowdrops for rebirth to meaning death or bad luck to the Victorians; touching on Wassailing, the twice flowering Crataegus monogyna ‘Biflora’ and Joseph of Arimathea at Glastonbury, the Green Man, disgorging, foliate or with leafy head and beard, to why Lonicera blooms for so long and when brought into the house the differing effects it has on your dreams depending on your age!

Adrian advised us against picking blackberries after 29th September in view of what Satan did to them after being expelled from Heaven and landing on their prickles and ended his talk with Viscus album and evergreens.

If you have bought and wrapped presents, written cards and prepared the veg and are looking forward to a rest and a little tipple on Christmas eve then think again, Adrian told us this is traditionally the time to deck the house with foliage and berries – to do so before then will result in quarrels. You have been warned! 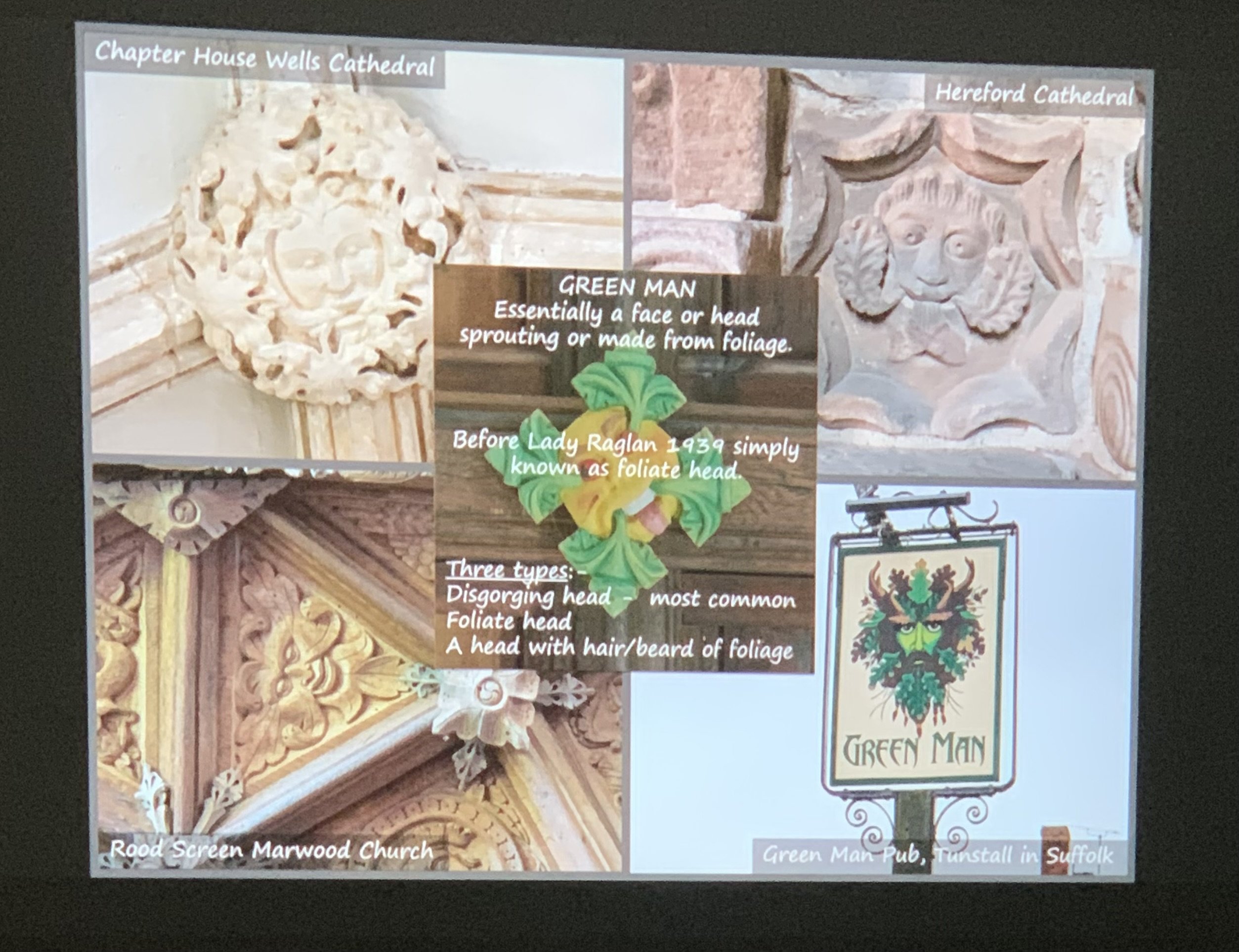 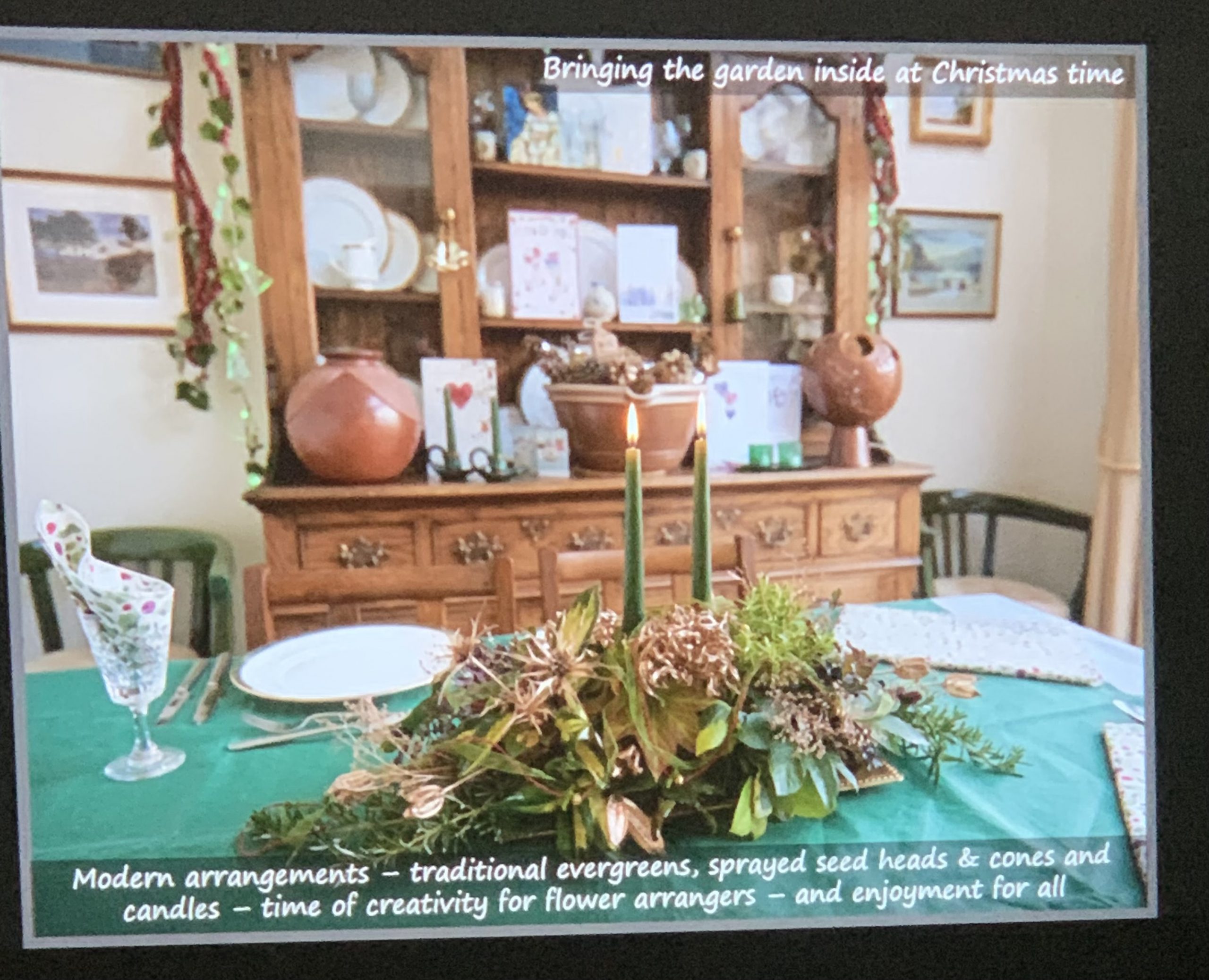 Sam Davies gave us an intriguing glimpse into life on his 2-acre smallholding in Shropshire.

Sam and his wife Kate – known as Tom and Barbara from ‘The Good Life’, have been self-sufficient in fruit and vegetables for the past 19 years. Both work part time whilst keeping chickens, geese, goats, bees and tending their allotment area, orchard and woods at their south facing former sheep shed home.

They store 50%  of their produce along with drying, pickling, freezing and preserving; they also make cider, apple wine, kombucha, honey and beeswax polish.

Sam is a passionate composter and advocate of the ‘no dig’ method so mulches his beds and makes his own potting compost.  They capture and use only rain water, burn their own wood, make cheese with their goat’s milk and have a novel way of baling hay!

Sam’s talk was delivered with spade loads of hints and tips and a liberal sprinkling of humour.

With all this work and giving talks, life is busy for Sam and Kate but let’s hope they find time to write the book they hinted at.

Andrew Woodall gave us a fascinating insight into his career, from  manufacturing stilts for picking tomatoes and keeping giant snails, working as head gardener at several locations to his current position at Broughton Grange.

Andrew touched on some of the challenges he has encountered during his career; interpreting someone else’s vision, working with designers and to budgets, the aftermath of landscaping with modern machinery and living and working in Italy’s daytime heat.

Andrew’s first job in 1992 at Pennington House was to reinstate its garden which had been untouched for ten years. As a big step up 2000 his next job was to maintain the established garden at Fort Belvedere. In 2003 Andrew moved to Il Palagio in Italy to work alongside Arabella Lennox-Boyd where his first job was to sort out drainage problems due to compacted soil.

In 2006 Andrew became head gardener at Broughton Grange, working with a team of four he manages a 25 acre garden set within 400 acres of beautiful countryside near Banbury. The Grange’s gorgeous three terraced walled garden was designed by Tom Stuart-Smith with the  lower terrace’s low box hedging representing the cells in ash, beech and oak leaves. The rest of the gardens design is the work of the owner and Andrew. Andrew told us that time during lockdown was put to good use by digging out box with blight and replacing with 4000 Euonymus ‘Jean Hugues’. This took three weeks to place and plant in the lower terrace alone!

To start our new club year we were treated to a talk by Robin Pearce. Four years after retiring from the nursery trade Robin finds himself busy writing, giving talks and judging, including at this months Chelsea Flower Show.

Robin talked about creating a prairie garden in our back yards saying that lots of American natives  blend well with our garden perennials, adding that we were probably familiar with several, such as Echinacea, Sanguisorba, Calamagrostis and Helenium.

Robin advised us that by providing a weed free, humus rich, moderately fertile site in full sun we could achieve a low maintenance, no staking, spraying or watering garden. To make it look natural he suggested choosing plants for a long season of interest, limiting the use of cultivars and species but repeating them, planting in drifts and curves and using winding paths.

Robin took us through some prairie plants, from the short and tall grassland areas to those at their woodland edges informing us of their height, suitability to our soil, health and vigour.

As well as looking beautiful, Robin said this style of garden would attract bees, butterflies and birds. Well worth trying a border or two.